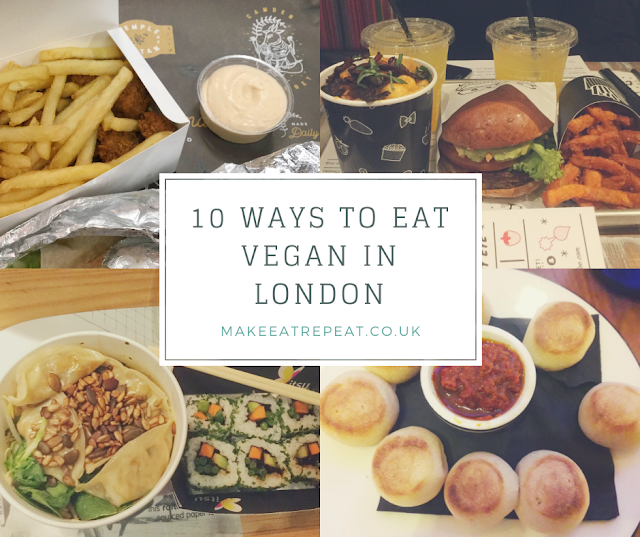 10 ways to eat Vegan in London

I have listed 10 ways to eat vegan in London! Plantbased food is high in demand and London is a vegan friendly city with many options to cater to all dietary requirements. I have featured fully vegan restaurants such as Temple of Seitan. Whilst I have also featured various vegan friendly cuisines and popular non- vegan chains such as Pizza Express who have a separate vegan menu. London is definitely one the most vegan friendly places on Earth. 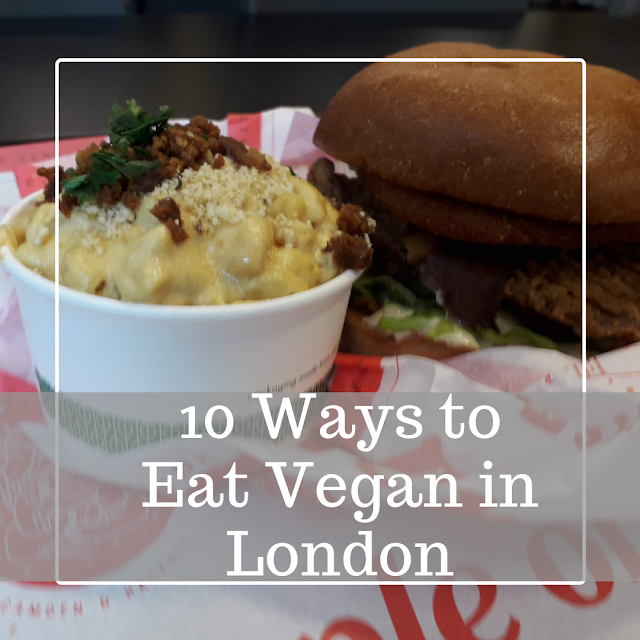 
Temple of Seitan are behind London’s first vegan fried chicken restaurant Temple of Hackney in Hackney. The restaurant was huge success with non vegans and of course their prime target of London vegans. 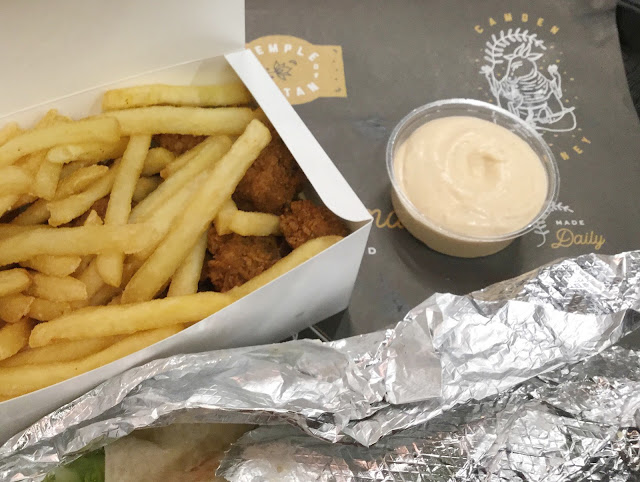 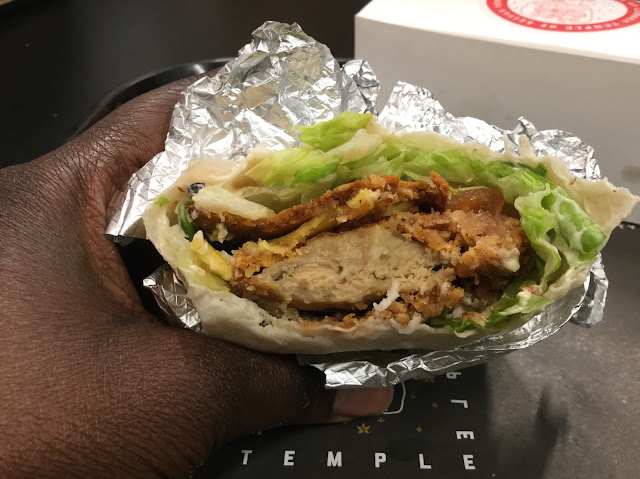 
Mildred’s is vegetarian restaurant chain whose menu has evolved over the years and is now mostly vegan.  Mildred’s is a place where people come to catch up with friends and celebrate their birthdays. 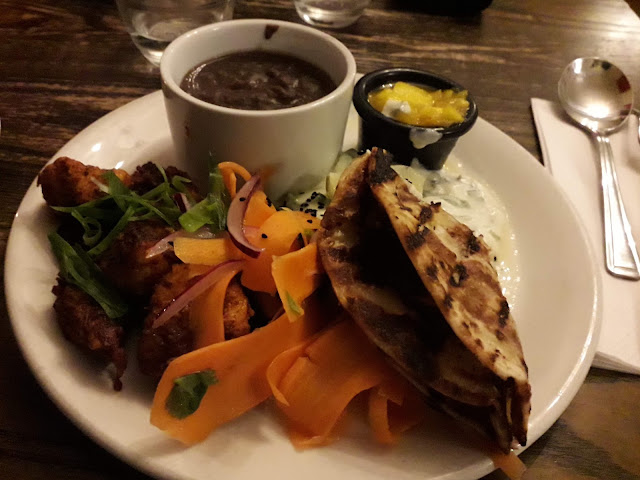 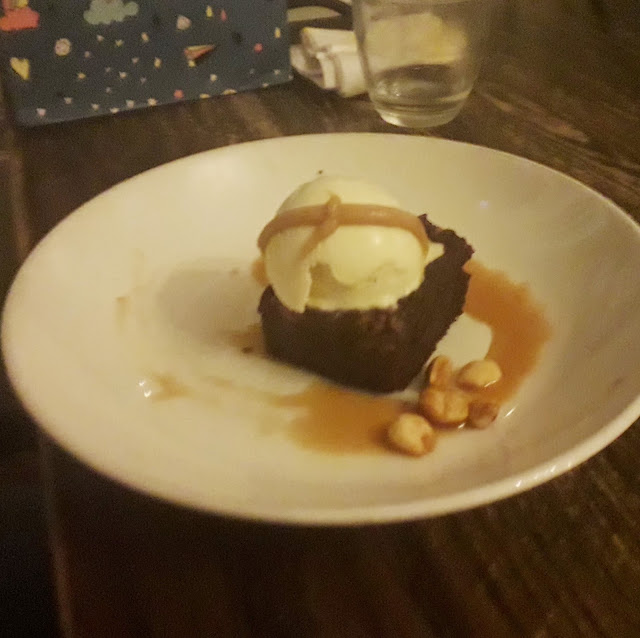 
Whilst drinking delicious cocktails, eating their delicious brownies served with ice cream popular dishes include Sri Lanka Curry and Tandoori Chicken.  The latter includes a vegan alternative to chicken which is in fact incredibly similar to chicken in both texture and taste. 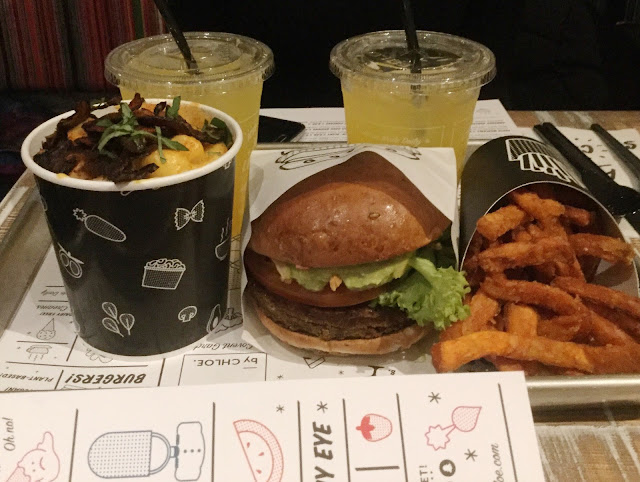 By Chloe is an American plant based food chain of restaurants in Covent Garden,Oxford Circus and Tower Bridge. Their menu includes nourish bowls,Guacamole Burgers, Mac and cheese,vegan cookies and even fish & chips. It is a casual dining restaurant that gets busy during peak times so by weary of this if you want to find a seat and enjoy your food in the restaurant. 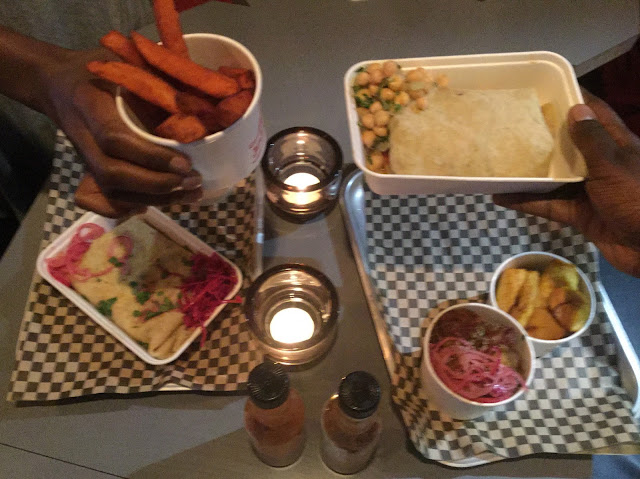 London was a wide range of Caribbean restaurants such as Jerkmaica in north London which have vegan friendly options. Jerkmaica have options such as soya chana curry and mixed vegetable based roti dishes. 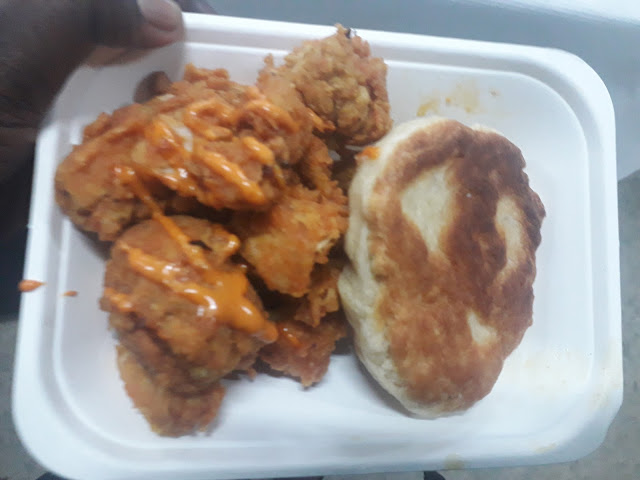 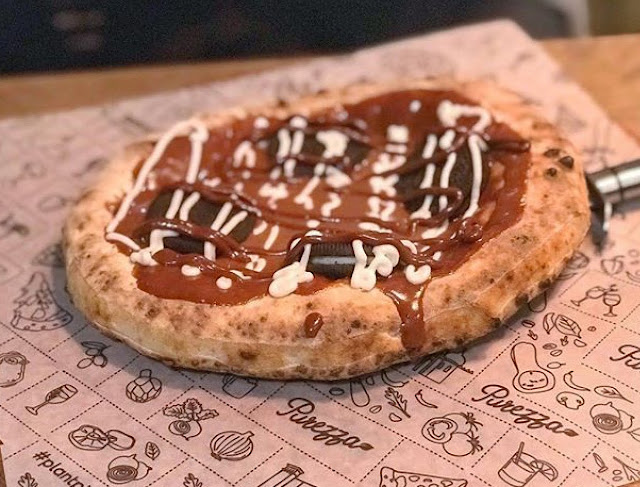 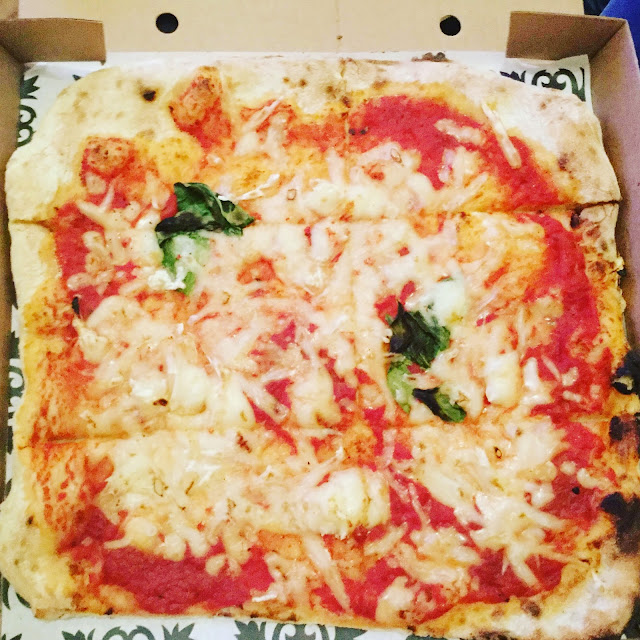 Vegan pizza has grow in popularity in London and Pizza restaurants such as Firezza (above), Pizza Hut and Zizzi now offer vegan cheese on their menu. 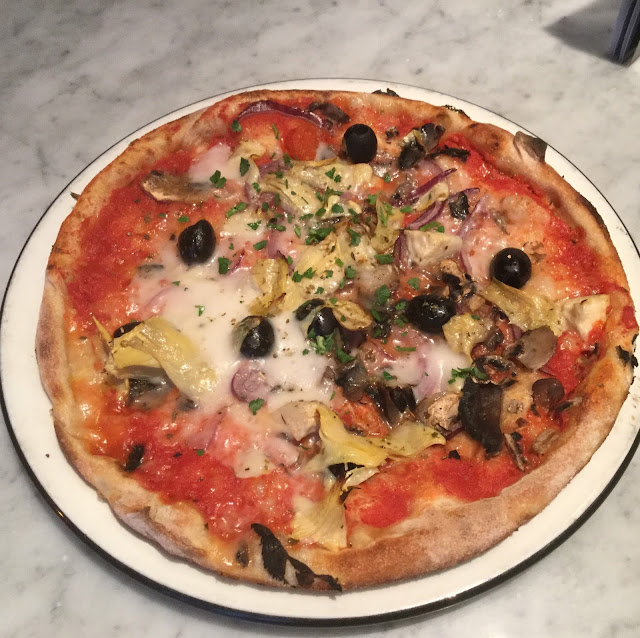 Pizza Express has a vegan menu which includes their legendary dough balls served with a harissa sauce (below). Whilst the Mains include a wide range of pizzas with or without vegan cheese and the desserts include a cheesecake and sorbet options. 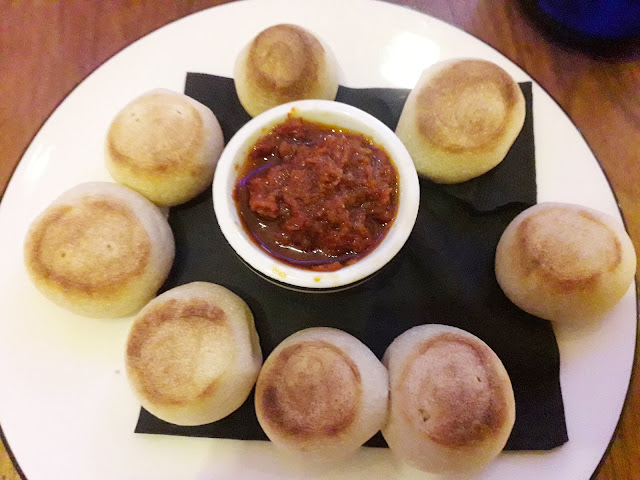 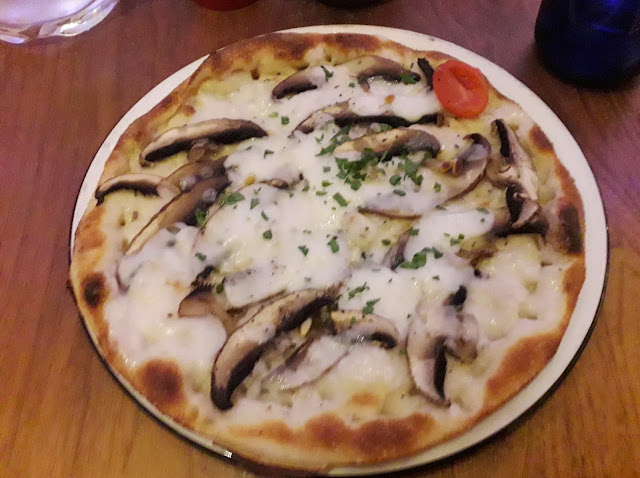 
The are also vegan pizzerias such as Purezza which opened in Camden earlier this year whose range includes vegan Oreo pizza. 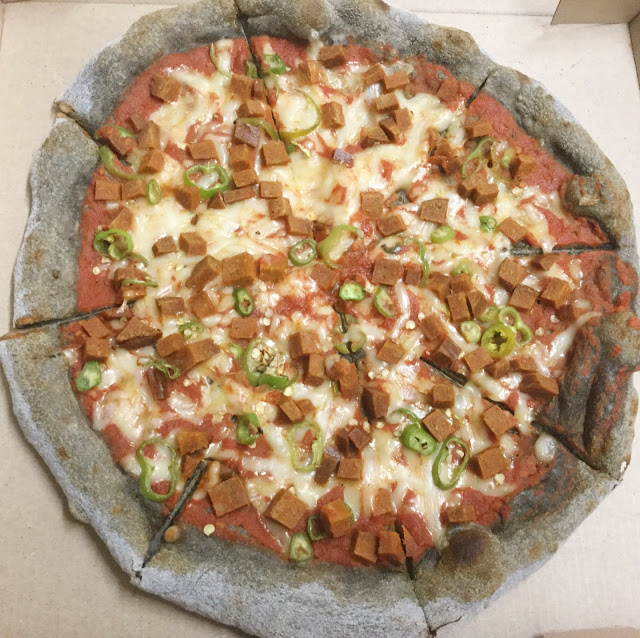 Pickywops pizza with vegan Seitan meat alternative pieces,jalapeños and vegan cheese on a burnt  wheat base

Whilst Pickywops (above) specialises in a variety of specialist bases such as burnt wheat and turmeric.


When vegan cheese is not on the menu a Marinara Pizza is on the menu at Franco Manca (above) and traditional Italian restaurants. It is a great option for vegans as it is a pizza with tomato sauce and basil.  My local Santa Maria also offers vegan cheese but their traditional Marinara pizza is my favourite (below). 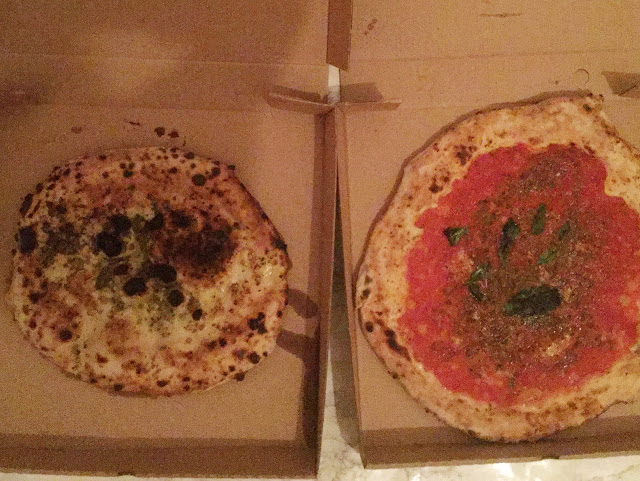 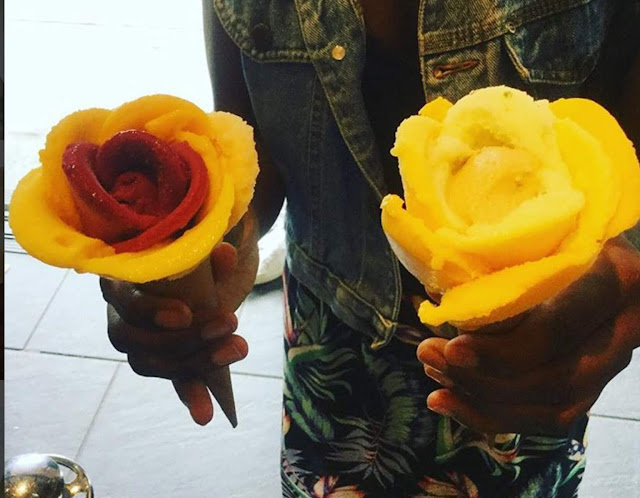 Amorino is famous for its gelato rose which is also vegan friendly due to their wide range of sorbets.  The menu includes melon,passionfruit, strawberry, mango and Chocolate sorbets. 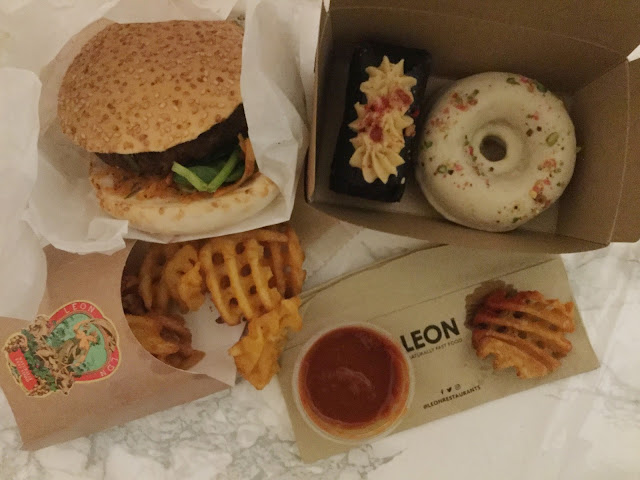 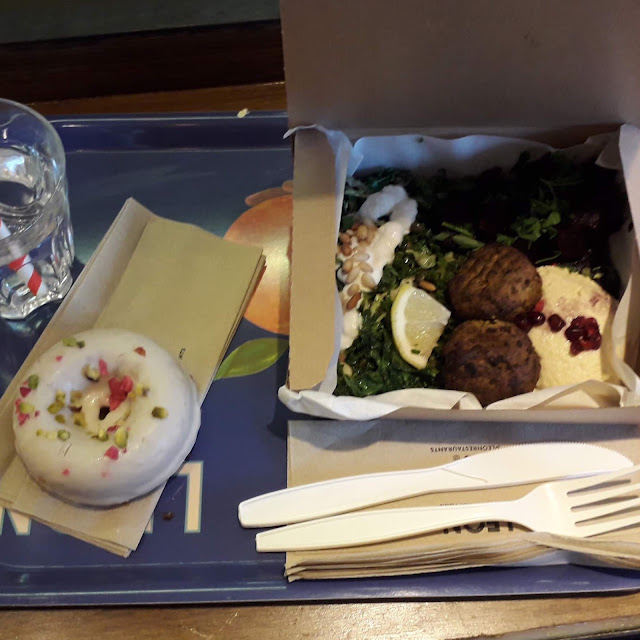 You don’t need to miss out on Nandos whilst eating a plantbased diet just ask your server what meals are vegan friendly.  The Garlic Sweet bread and fries are accidentally vegan whilst three of their burgers can be made vegan by removing the mayonnaise. 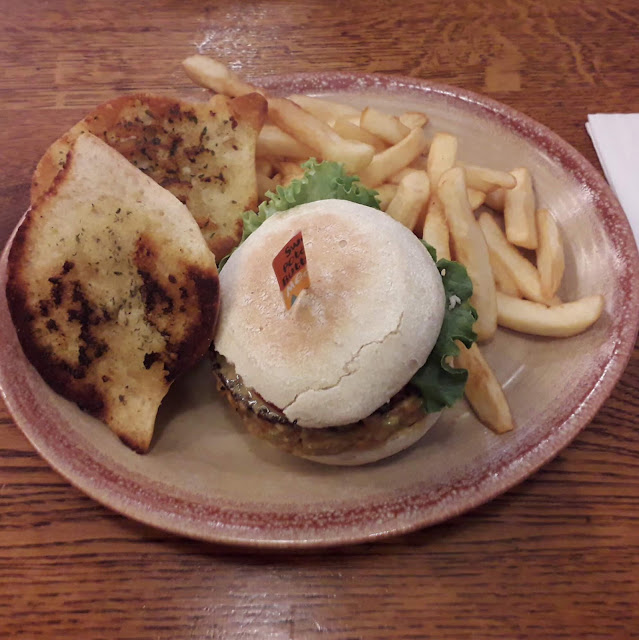 Sweet Potato burger no mayo (I told them no dairy and that I’m vegan), garlic bread and fries/chips eaten with ketchup (not seen) 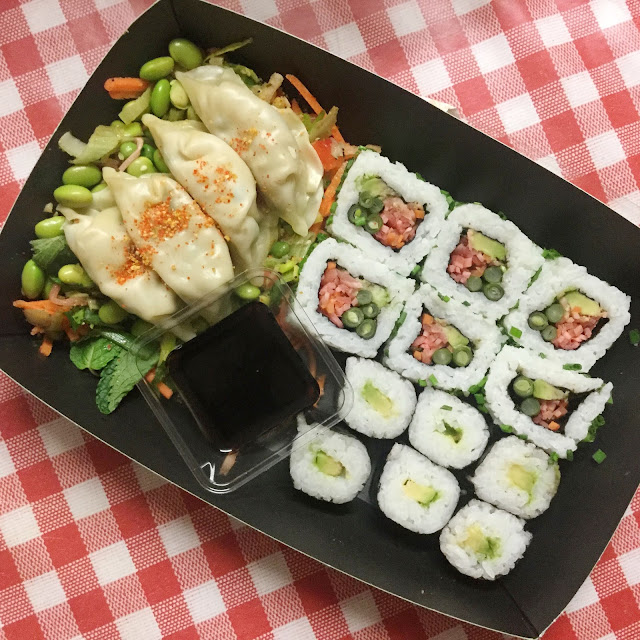 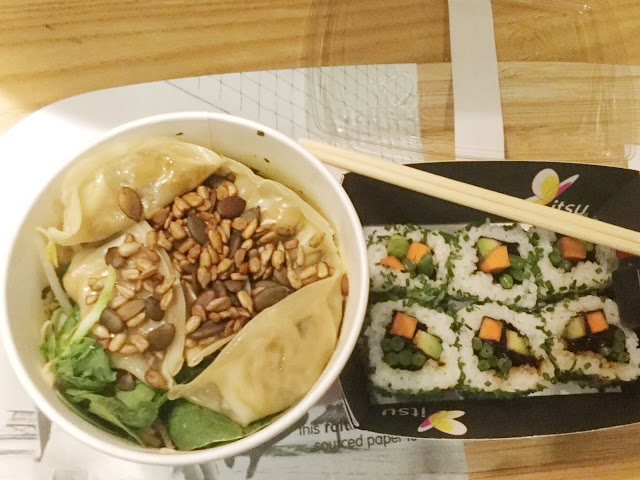 Half an hour before closing Itsu reduces the price on all of their sushi which I’d found within the chiller. So prices can be as low as £2.00 I usually purchase a vegetable sushi collection pack for £2.75 after the end of day reduction.
Have you tried any of the cuisines and restaurants listed above?  Let me know in the comments below.


Thanks for reading,I hope this gave you some ideas of how and where to eat in London.